skip to main | skip to sidebar

So in GA there are some of these nike missile sites i heard and there is a lot of story behind them apparently. yesterday me and my friends spent like 5 hours researching these bases and found a lot of stuff from nuclear warheads all of the way to a zombie end of the world aha! with a little satanic worship in the middle. well it so happens there was a base right down from my house....buried under like 30 ft. of rock and clay. so a group of us got shovels and pick axes and went to work. during the research we were rying to find blueprints of some sort but you had to buy them (im too cheap) so we couldnt find that. we did tho notice that most of the bases were built the same with radars silos and living quarters the same. radars were normally far away from the silos tho so we found one still down the road called "anchorage" which is now a christian drug rehab center. but we all went down there and dug for roughly 3 hours...we got 6 or 7 ft. down...fuck...im most likely going to find blueprints today and im going to dig for about a week straight until i find it. if i dont in a week i fail :] ill post my progress for you.
Posted by Nick S. at 6:48 AM No comments:

What is New World Order?

The most common theme in theories NWO is that a powerful and secretive group of globalists (illuminati) is conspiring to rule the world through a so called world government. This would replace sovereign states and other checks and balances in international power struggles. So many times in history and even now we have events that are seen as the begining to this on-going plot for world domination through secret political meetings.

Prior to the early 1990s, New World Order conspiracism was limited to two subcultures, primarily the militantly anti-government right, and secondarily Christian fundamentalists concerned with end-time emergence of the Antichrist.[5] Skeptics, such as political scientist Michael Barkun, have expressed concern that right-wing conspiracy theories about a New World Order have now not only been embraced by many left-wing conspiracy theorists but have seeped into popular culture, thereby inaugurating an unrivaled period of millenarian activity in the United States of the late 20th and early 21st centuries. They warn that this development may not only fuel leaderless resistance by national-anarchists but have devastating effects on American political life, such as right-wing populism influencing elections as well as domestic and foreign policy
Posted by Nick S. at 6:56 AM 2 comments: 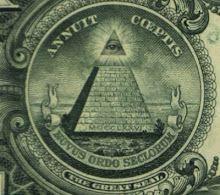